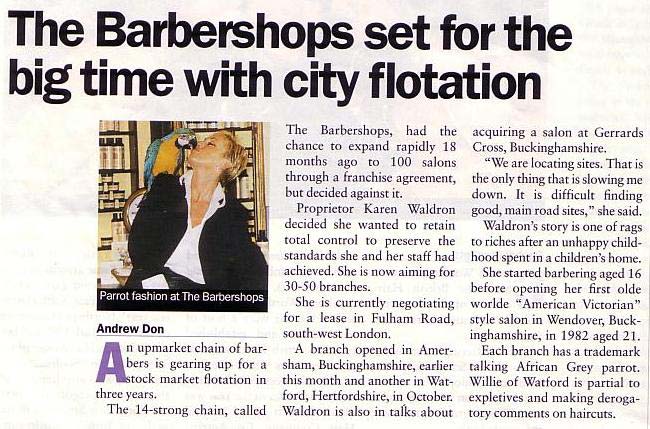 An upmarket chain of barbers is gearing up for a stock market flotation in three years. The 14-strong chain, called The Barbershops, had the chance to expand rapidly 18 months ago to 100 salons through a franchise agreement, but decided against it.

Proprietor Karen Waldron decided she wanted to retain total control to preserve the standards she and her staff have achieved. She is now aiming for 30-50 branches.

She is currently negotiating for a lease in Fulham Road, south-west London.

A branch opened in Amersham, Buckinghamshire, earlier this month and another in Watford, Hertfordshire, in October. Waldron is also in talks about acquiring a salon at Gerrards Cross, Buckinghamshire.

“We are locating sites. That is the only thing that is slowing me down. It is difficult finding good, main road sites” she said.

Waldron’s story is one of rags to riches after an unhappy childhood spent in a children’s home. She started barbering aged 16 before opening her first olde worlde ‘American Victorian’ style salon in Wendover, Buckinghamshire, in 1982 aged 21.

Each branch has a trademark talking African Grey parrot. Willie at Watford is partial to expletives and making derogatory comments on haircuts.