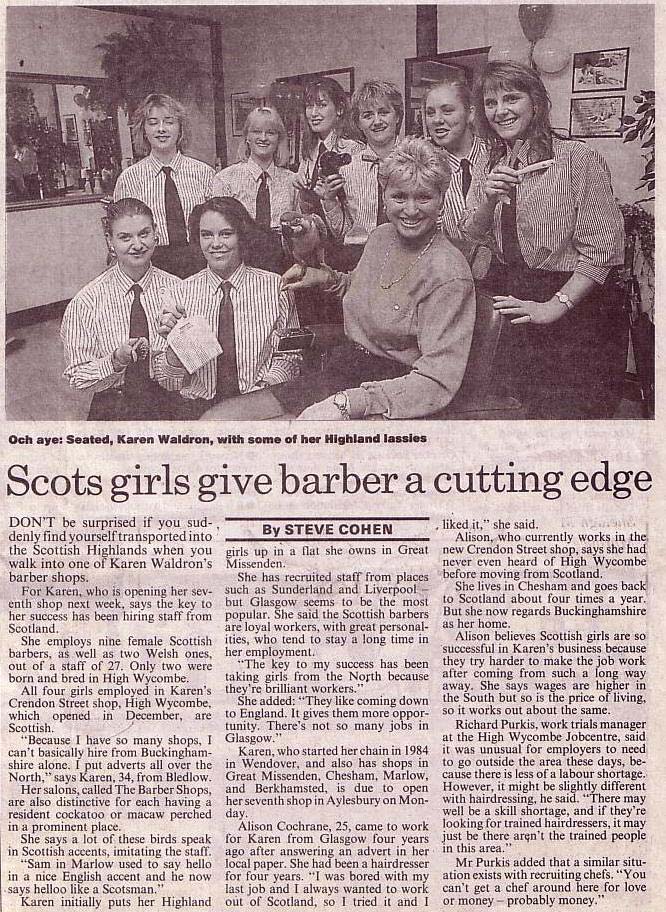 Don’t be surprised if you suddenly find yourself transported into the Scottish Highlands when you walk into one of Karen Waldron’s barber shops.

For Karen who is opening her seventh shop next week, says the key to her success has been hiring staff from Scotland.

She employs nine female Scottish barbers, as well as two Welsh ones, out of a staff of 27. Only two were born and bred in High Wycombe.

“Because I have so many shops, I can’t basically hire from Buckinghamshire alone. I put adverts all over the North,” says Karen, 34 from Bedlow.

Her salons, called The Barber Shops, are also distinctive for each having a resident cockatoo or macaw perched in a prominent place.

She says a lot of these birds speak in Scottish accents, imitating the staff. “Sam in Marlow used to say hello in a nice English accent and he now says hello like a Scotsman.”

Karen initially puts her Highland girls up in a flat she owns in Great Missenden.

She has recruited staff from places such as Sunderland and Liverpool – but Glasgow seems to be the most popular. She says the Scottish barbers are loyal workers, with great personalities, who tend to stay a long time in her employment.

“The key to my success has been taking girls from the North because they’re brilliant workers.”

She added, “They like coming down to England. It gives them more opportunity. There`s not so many jobs in Glasgow.”

Karen who started her chain in 1984 in Wendover, and also has shops in Great Missenden, Chesham, Marlow and Berkhamsted, is due to open her seventh shop in Aylesbury on Monday.

Alison Cochran, 25, came to work for Karen from Glasgow four years ago after answering an advert in her local paper. She had been a hairdresser for four years. “I was bored with my last job and I always wanted to work out of Scotland, so I tried it and liked it,” she said.

Alison, who currently works in the new Crendon Street shop, says she had never even heard of High Wycombe before moving from Scotland.

She lives in Chesham and goes back to Scotland four times a year. But she now regards Buckinghamshire as her home.