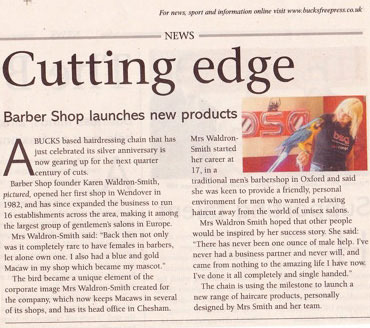 A Bucks based hairdressing chain that has just celebrated its silver anniversary is now gearing up for the next quarter century of cuts. Barber Shop founder Karen Waldron-Smith, pictured, opened her first shop in Wendover in 1982, and has since expanded the business to run 16 establishments across the area, making it among the largest group of gentlemen’s salons in Europe.

Mrs Waldron-Smith said: “Back then not only was it completely rare to have females in barbers, let alone own one. I also had a blue and gold macaw in my shop which became my mascot.”

The bird became a unique element of the corporate image Mrs Waldron-Smith created for the company, which now keeps Macaws in several of its shops, and has its head office on Chesham.

Mrs Waldron-Smith started her career at 17, in a traditional men’s barbershop in Oxford and said she was keen to provide a friendly, personal environment for men who wanted a relaxing haircut away from the world of unisex salons.

Mrs Waldron-Smith hoped that other people would be inspired by her success story. She said: “There has never been one ounce of male help. I’ve never had a business partner and never will, and came from nothing to the amazing life I have now. I’ve done it all completely single handed.”

The chain is using the milestone to launch a new range of haircare products, personally designed by Mrs Smith and her team.