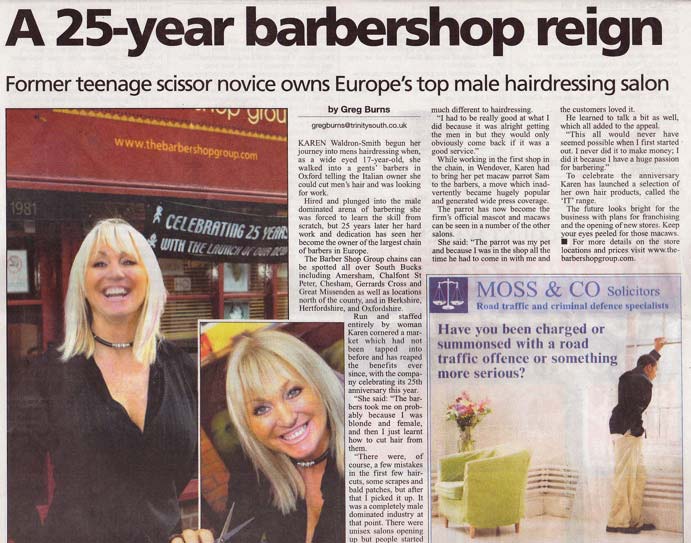 Karen Waldron-Smith begun her journey into men’s hairdressing when, as a wide eyed 17-year-old, she walked into a gents’ barbers in Oxford telling the Italian owner she could cut men’s hair and was looking for work.

Hired and plunged into the male dominated arena of barbering she was forced to learn the skill from scratch, but 25 years later her hard work and dedication has seen her become the owner of the largest chain of barbers in Europe.

The Barber Shop Group chains can be spotted all over South Bucks including Amersham, Chalfont St Peter, Chesham, Gerrards Cross and Great Missenden as well as locations north of the county, and in Berkshire, Hertfordshire, and Oxfordshire.

Run and staffed entirely by woman Karen cornered a market which had not been tapped into before and has reaped the benefits ever since, with the company celebrating its 25th anniversary this year. “She said: “The barbers took me on probably because I was blonde and female, and then I just learnt how to cut hair from them.

“There were, of course a few mistakes in the first few haircuts, some scrapes and bald patches, but after that I picked it up. It was a completely male dominated industry at that point. There were unisex salons opening up but people started…

“I had to be really good at what I did because it was alright getting the men in but they would only obviously come back if it was a good service.”

While working in the first shop in the chain, in Wendover, Karen had to bring her pet macaw parrot Sam to the barbers, a move which inadvertently became hugely popular and generated wide press coverage.

The parrot has now become the firm’s official mascot and macaws can be seen in a number of the other salons.

She said: “The parrot was my pet and because I was in the shop all the time he had to come in with me and the customers loved it.

He learned to talk a bit as well, which all added to the appeal. “This all would never have seemed possible when I first started out. I never did it to make money; I did it because I have a huge passion for barbering.”